At Good Fruit Video, we’ve had the pleasure of working with hundreds of clients throughout the last decade. Clients that provide all sorts of different products and services to their customers, consumers, employees, stakeholders, donors, and volunteers. Every single client has their own goals for their video project, but one thing always stays the same… every client wants to know how much the video is going to cost.

In this blog, I will work to educate you on the variables that ultimately lead to the cost of your video project.

Planning is extremely important for ending up with an excellent video. Answering the questions about the purpose, audience, message, timeline, and vehicle(s) for your video is paramount to the overall success of the project.

Once you answer those questions, you will need to identify how you want to project to be done. Will your production be:

All five of these production types have benefits and negatives, depending on your goals for the project.

The size and expertise of your crew will change the price quite a bit. A person or crew, fresh out of high school or college, is going to cost less than a professional crew with years or decades of experience producing videos for clients. Utilizing a member of your own team to shoot the video is another option, though unless that is their main role, it may hinder performance in their daily work.

Depending on the production type, the size can also vary. A documentary-style production will normally have far fewer crew members, usually one to three, while a cinematic crew may have five, ten, or more crew members on set.

Good lighting and quality sound are probably the two biggest factors behind a great video. Understanding the need for additional light and sound equipment, as well as stabilization and other gear, such as a slider, jib arm or even additional camera is extremely important to make a quality video.

If a videographer or crew is traveling any amount of distance in order to capture video for your project, that will be included in your cost for the video. Travel rates vary, depending on the distance, crew size, and time it will take the crew to get to the shoot and get back to the office. Shoots that take multiple days may also incur room and board charges.

Most production companies charge in half-day and full-day when it comes to shoots. A half-day is usually up to four or five hours and a full-day is up to eight or ten hours. However, there are teams that may charge in only full days or simply per hour. It really depends on the company and how they feel they can bring the best value to their client. Also, remember, a videographer or crew will need time to set up and tear down equipment, before, after, and during a shoot. Plan accordingly.

Again, depending on the approach to a video, post-production can vary. If a video was shot in a documentary style, the story will have to be created from the interviews and other audio captured. From there, additional video (known as B-Roll) will be used to complement the narrative. A process like this can take anywhere from two to four hours per hour of video capture. With cinematic videos, putting the story together may take less time, as so much was put into scripting and controlling the production. However, after the story is put together, things such as color grading and sound sweetening are done to polish off the video and make it ready for viewer consumption.

Do you need your finished video in a month, a week, or a day? The turnaround time for the finished video will dictate the amount of concentrated effort needed by the team to execute your production and thus will affect the cost of the project. However, turnaround time is not only for finished projects. The amount of time given prior to scheduling, rescheduling and even canceling a video shoot can dramatically affect the workflow of a production team and can ultimately lead to additional costs.

Is the shoot the one and only opportunity to get video of an event or interview with a certain person? If so, the cost of opportunity is great. NOTHING can be left to chance. EVERYTHING has to work right. The pressure is on and it’s going to cost you. But you’ll be happy when you have the video later on.

Conversely, when you book a videographer or crew, you are booking their most valuable commodity, their time. Until we are able to clone ourselves, there’s a huge value to that.

There’s one thing that many people consider when thinking about the price of a video. Length. Call me crazy, but I don’t see this as a variable that should affect the overall budget. A video, with little video editing needed, may take little time to complete, whereas a 30-second spot, may take hours and days to get finalized. Ultimately, if the video does what it’s intended to do, the length should not matter.

Instead of looking at the length or video as a value driver, consider these other things instead…

What’s the value of the goal you are trying to meet?

Will the video help you make money? How much?

Save money? How much?

Recruit? Who? What is that person(s) worth to your organization?

Train talent? On what? Will a video help you do this better?

How long will you use this video?

So how much does a video cost? Ultimately, it depends.

If you have any other questions, please feel free to give us a shout. Thanks! 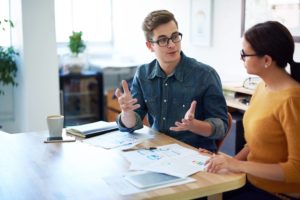 When you hire a professional video team to make your content, you are paying a premium for the expertise, experience, equipment, and quality that comes from a professional. Depending on the size of your company, it can be a huge step, but one that can have a huge return on investment if done correctly.

There are a few things you can do to help streamline the production and save time and money in the process.

You should expect to be spending money on a professional. With a budget under $1,000, it’s unlikely you’ll be able to get much done. If you have a budget under that, you may want to look for students who are currently studying video production as a possible solution. Doing a production yourself may also be an option, but work on it will take you away from what you do best and can ultimately do more harm than good.

The more specific detail you can provide about what you want of your video, the better chance the final piece will fit your vision and meet or exceed your goals. Things like:

1. What’s the purpose of the project?

2. Who is your target audience?

3. What are your key messages?

4. What is your timeline?

The more specifically you can answer these questions, the better the end product will be.

Having assets, such as pictures and logos, at the correct size and resolution, prepared beforehand will help the production run smoothly. The bigger a picture, the better. Think, at least 1000 pixels in width and in height. Vector files (.ai and some .pdf files) allow you to enlarge and shrink the graphic without losing any quality and should be used if possible. If not, use the same rule of thumb as with a picture.

Waiting until the last second can be a headache and painful on the pocketbook. Take the time to look at what is coming up for your organization and decide then and there, if the video is something you want to be included.

6. Be Decisive and Thorough

You paid a premium to get a quality piece(s) produced. Now you need to utilize it so it can help you meet your needs. Whether that’s embedding it in your website, sharing it on social media, sending it in e-mails, using it at presentations, or, hopefully, a combination, your video will only be effective if it’s used. If you need help with this, ask your network or the production team for suggestions for someone who can help.

I hope you found this blog informative and helpful to make your next video project the most pain-free and fruitful experience! As always, if we can help further, feel free to give us a shout. Thanks!